How To Effectively Subrogate Mother Nature 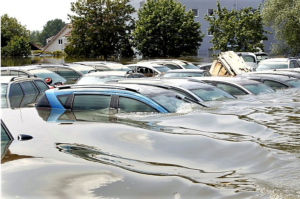 Acts of God happen frequently.  Sometimes they aren’t covered by insurance, other times they may be covered but it quickly becomes apparent that there is no subrogation potential.   But what if an act of God occurs, resulting in covered damage and the property owner was aware that under certain conditions of Mother Nature, the act of God would happen.

Digging deeper into investigations is what separates the ordinary from the extraordinary.   During  a recent closed file audit of a leading insurer, we came across a series of flood claims that warranted further investigation.   At first  glance it would appear the flood was an act of God.   The scenario involved the claims made by insureds who had parked their vehicles at a commuter train station near a major river.   A flash flood ensued, totaling out most of the vehicles and causing extensive damage to the remainder.

The carrier paid out the claims under their respective insured’s comprehensive coverage and the handling adjusters each indicated no subrogation potential existed.  During an audit by SecondLook, a leading provider of recovery services, the files were identified as having potential subrogation.

When the weather was researched it was determined that the flood occurred under a full moon at high tide during a nor’easter.   Further digging determined that this particular parking lot always flooded when these three weather phenomenon occurred simultaneously.   The SecondLook adjuster dug a bit deeper to find a series of prior claims related to this type of flooding which would indicate that the parking lot owners were aware of the risks and warnings should have been provided to the vehicle owners.

The adjuster dug even deeper, and found that the parking lot had grown in size.  Aerial imagery showed that year over year there had been encroachment on the river as the owners brought in fill.  Yet no permits were ever found, indicating that this parking lot expansion was occurring without the oversight and permission of the local government.

The SecondLook adjuster reached out to the carrier for the parking lot, presenting evidence that the owners were aware of the risk.   The evidence was compelling enough that a settlement was reached with the parking lot carrier, subrogation money was collected for the SecondLook client, and deductibles were returned to many very happy customers.

There is a reason that 15% of all claim files are closed with missed subrogation.   Adjusters, models, AI and ML can identify less complex recovery opportunities.   SecondLook’s Chameleon technology takes things a step further by adding over 600 years of collective claims experience to identify what everyone else misses…to the tune of millions of dollars annually for insurers in the US and abroad.

If you dare to take a SecondLook, who knows what you will find in those closed files.

Chris Tidball is an Executive Claims Consultant with SecondLook, a leading provider of subrogation services.  His career has spanned more than thirty years, working in adjusting, leadership, and consulting roles for multiple top insurers.   He is the author of Re-Adjusted: 20 Essential Rules To Take Your Claims Organization From Ordinary To Extraordinary,  fictional thrillers Swoop & Squat and Deep State and is the creator of the TV series The Adjuster.   To learn more about how SecondLook can deliver missed revenue to you please contact ctidball@2ndlook.net or visit our website.

2ndlook ai audit chameleon chris tidball claims findingmillions flood missed recoveries missed subrogation pip/medpay recoveryreview recovery review secondlook subro subrogation zozotechnology
Privacy Settings
We use cookies to enhance your experience while using our website. If you are using our Services via a browser you can restrict, block or remove cookies through your web browser settings. We also use content and scripts from third parties that may use tracking technologies. You can selectively provide your consent below to allow such third party embeds. For complete information about the cookies we use, data we collect and how we process them, please check our Privacy Policy
Youtube
Consent to display content from Youtube
Vimeo
Consent to display content from Vimeo
Google Maps
Consent to display content from Google
Save
Skip to content